Well, further to my last post, the half hat has changed tack entirely. I was never happy with the size of the pattern or the sewn hat. Having to add darts gave the hat very full sides and almost a winged look.

I decided to cut the pattern much smaller and make the hat from some blocked felt. It was much easier to make and achieved a more pleasing shape. I also cut a strap for the back and stitched this in place. The edges of the hat have had gold and black trim, and a few black beads added. The hat has been stiffened with traditional shellac. I am still dithering about a small veil, what do you think? 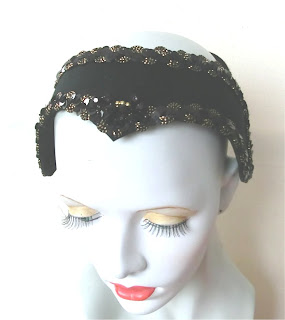 I am busy gearing up for my stall at a Vintage clothing fair in Hereford on March 16th. So it has been a lot of fun make fascimiles of 1940s and 50s hats. I saw the one below in a knitting pattern ( you can see the original picture), and decided to have a go. Again it is blocked wool, but I must admit the edges aren't rolled as well as I would of liked...still, its been a learning curve! 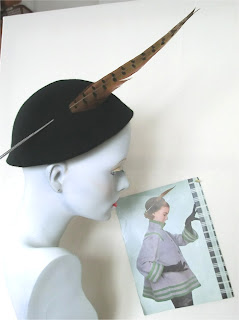 Promote your Page too

Sara
I am an avid collector of vintage everything, including sewing patterns. My favourite pastime is sewing and creating hats whilst drinking red wine!